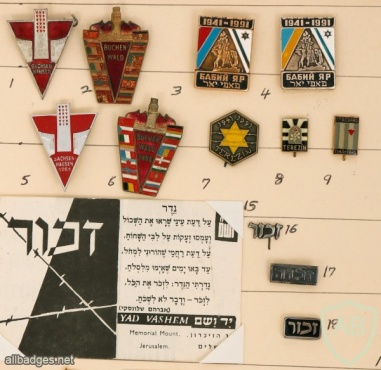 Approximately 55 pins, most of them commemorating Jewish communities that were destroyed during the Holocaust and of various memorial organizations. Israel and other locations, second half of the 20th century.
The collection contains:
‚Ä¢ Yad Vashem pins ‚Äì a flame with the legend "And to them will I give in my house and within my walls a memorial and a name [yad va-shem]... that shall not be cut off."
‚Ä¢ Pins from the Simon Wiesenthal Center.
‚Ä¢ Pins of Jewish communities in Europe. ‚Ä¢ Pins commemorating those murdered in the Buchenwald concentration camp. ‚Ä¢ Two pins marking the fiftieth anniversary of the massacre at Babi Yar.
‚Ä¢ A pin bearing a Star of David and the legend "Halt Hitler" ‚Äì evidently created by a Jewish organization in North America during World War II.
‚Ä¢ And more.
A total of approx. 55 pins (some appear in several copies). Size and condition vary.
Provenance: Morton Leventhal Collection, New York.