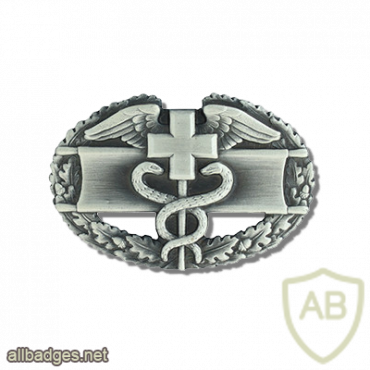 The Combat Medical Badge is an award of the United States Army which was first created in January 1945. Any member of the Army Medical Department, at the rank of colonel or below, who is assigned or attached to a ground combat arms unit of brigade or smaller size which provides medical support during any period in which the unit was engaged in ground combat is eligible for the CMB. According to the award criterion, the individual must be performing medical duties while simultaneously being engaged by the enemy; strict adherence to this requirement and its interpretation (e.g., distant mortar rounds vs. direct small arms fire) will vary by unit. As of 3 June 2005, Special Forces medics are no longer eligible for award, but may now receive the Combat Infantryman Badge. A revision has allowed aviation medics to be eligible for the CMB. The non-combat proficiency equivalent is the Expert Field Medical Badge.