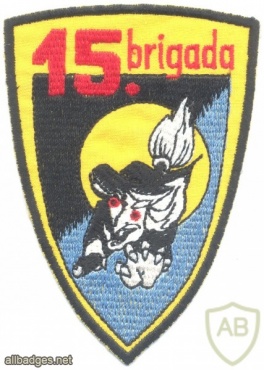 Embroidered on yellow cloth base with merrowed edging.

The 15th Aviation Brigade was a brigade in the Air Force Unit of the Slovenian Armed Forces. The unit operated from 1992 to 2004. It was divided into two squadrons, one fixed-wing and one helicopter squadron, flying from two bases, Brnik airport and Cerklje ob Krki. The 15 Brigada was under control of the 1 Air Force and Air Defence Force Command located at Kranj. On 2004 Slovenia entered NATO. Now NATO is responsible for protecting Slovenian airspace. On 8 November 2004 the 15 Brigada was officially disbanded. In its place three new units were formed. The 15 Air Force Brigade was restructured into the 15 Helicopter Battalion, the Air Force School, and the Air Force Base.