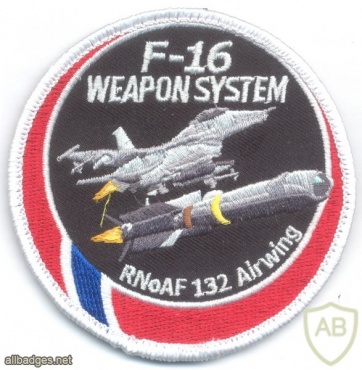 Embroidered on cloth base with merrowed edging and velcro backing.

132nd Air Wing is based at RNoAF Bodø Air Station and is responsible for all air station's opertions. It includes the Norwegian Joint Headquarters at Reitan and a detachment of Sea Kings at Station Group Banak.

Bodø Air Station (Norwegian: Bodø hovedflystasjon) is a military airbase of the Royal Norwegian Air Force (RNoAF) located at Bodø, Norway. It is home to the General Dynamics F-16 Fighting Falcons of the 331 and 332 Squadrons and a detachment of Westland Sea King search and rescue (SAR) helicopters of the 330 Squadron.